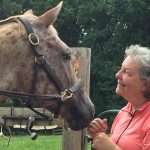 CPT is very fortunate to have Robin Puryear on staff.  Robin’s animal training education started at 4 years of age, when she coaxed her parents to enroll her in professional horse riding lessons. Today, many decades later, she still successfully shows horses in dressage, a horse competition emphasizing obedience, precision, flexibility, and balance.

Similarly, Robin’s dog training education began during her youth. She has since achieved AKC conformation championships, titled Border Collies in agility competition, and was for multiple years the Training Director for the Atlanta Obedience Club.  She is also an accomplished breeder, having bred several of the Vizslas she showed in conformation.  Her breeding and showing experiences provide Robin an in-depth understanding of the social and cognitive development of dogs through all life stages.

Despite her myriad of accomplishments, Robin’s exposure to CPT started as a student, when she sought outside consultation to address canine anxiety issues and intra-pack conflict.  She then attended CPT’s agility program while preparing 2 of her Border Collies for AKC, USDAA, and NADAC agility trials.  The outcomes she observed at CPT impressed Robin.  Subsequently, she referred several competition colleagues to CPT who were experiencing roadblocks or behavioral issues inhibiting their dog’s training program.

Meanwhile, CPT observed Robin’s saliently outstanding enthusiasm and communication skills, as well as her knowledge and experience.  Robin regularly produced valuable input during her CPT classes.  She was as much an unpaid teacher as she was a student. Consequently, when a trainer position opened we seized upon the opportunity to add Robin to CPT’s staff.

Robin has a mission of observing a distinct spark of comprehension in a dog’s eyes while viewing the morphing of the dog and handler into a joyful unified team.  Robin teaches Group Class for CPT.